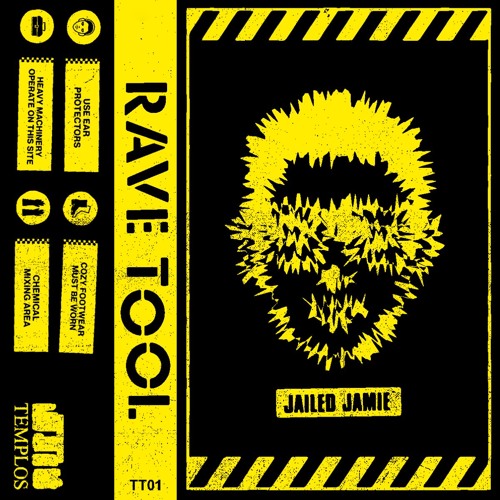 Have you ever seen a cover and thought: „I am just going to buy it, because this already looks like something I would like“? Rave Tool comes in a relatively normal cassette cover, but it’s the details that made me buy it right from the spot.
The title itself, „Rave Tool“, already implies what musical journey you are about to take and yet you are not prepared for the tools that are being handed to you.
Rave Tool is Jailed Jamie’s (also known as Skygaze) debut album and was released on the DIY label Templos Tapes which he started with friends in April 2019.

This record is not only one single tool, it is a full-on tool box filled with all the gadgets you need for a great rave. Jailed Jamie uses break-beats in a way you probably never heard. Ever.

The record starter track Don’t Care About You starts classic with break-beat and sample and once the introductory build-up makes way for the synth and acid melody, you know that you are in for a great ride.
Because now Moon Rising becomes the expansion of that first song. It uses a simple organ melody to hook you and then reels you in with compelling rave sounds that you thought were only available on white label vinyl in London’s underground record stores.

And that is where we are headed (sound-wise): I Kidnapped My Cat, which seamlessly comes after, slams a rave woof in your eardrum and makes it resonate through your whole body before Jamie transforms it into Michael’s Gems, which, after Jamie already shook your eardrum, continues to make you shake.

All this is merely foreplay though in comparison to my favorite track on this album: Shoreditch At Night. Shoreditch, if you are not familiar with it, is a district in the East End of London and was home to the infamous Andrew Weatherall (RIP). The intro of this banger with the rewind and the compressed synth is already promising, but less than nothing compared to the fat break-beats that are coming after. When those hit, you actually can feel like you are in London at night at a club and this being played is melting your face. You turn to your friends (“Can you hear this?!”) and they are just in awe as you are.

The closing sample also leads the way to our next round: Ruock It. Where Jamie takes us on a ride with the Firestarter itself but only to accompany us through the tunnel of hardcore synth melodies. And we blindly follow. “Go.”
We take a step back after this to come down to UNDRGRND. Which starts with a classic Rave Tool and house sample. All this is a tribute to 90s electronic you dig and love, yet Jamie masters it that it is still literally underground, because the sounds that are used here are innovative and fresh and the samples are used to emphasize exactly that.

Head-Mess the closing track, is the ambient finish you need after this. It cools down, not much though, and provides you with the broader musical horizon Jailed Jamie obviously has. The way the different parts are orchestrated here show that Jailed Jamie put a lot of love and thought into this song as he did to the rest of the album.

All in all, I think Rave Tool is an excellent album to either introduce newbies to jungle and drum and bass and/or Techno overall. A literal tool you can use to either get the crowd dancing, the nerds dropping their jaws, opening minds to new music or all of the above. Try it.

Rave Tool was released in April 2019 and is available on Templos Tapes as cassette and digitally. The digital release includes two bonus tracks fittingly called: Ain’t What U Got and Added Tool.